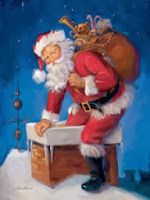 I hope you’ve been enjoying the stories about my family and our holiday experiences, let me say, they’ve been quite fun to write about.

And surprisingly, none of my family has threatened to disown me either, so I figure that’s a plus.

Today, I decided to talk a little about my kiddos.

They know all the ins and outs about Santa Claus, he even sends them an email video every year, talking to them about what they want for Christmas. It’s fun, and they enjoy it.

However, there’s one thing that’s always bugged my kids.

We don’t have a chimney.

So inevitably, with both kids, we’ve had to have the “How does Santa get in, if we don’t have a chimney?” conversation.

With my daughter, a lot of this was answered, thanks to the preschool she attended, where they sent home keys on a string to hang on the front door for Santa. (Uncut keys from the hardware store, to dangle on the front door Christmas Eve.)

A brilliant solution for my little girl.

My son, however, is a bit smarter than she was. Or maybe he’s more observant, I don’t know. But he figured out pretty quickly that the “special key” isn’t cut like the regular house keys. And what’s Santa going to do when the front door chain is thrown?

Because, after all, you can’t get the door open with the chain thrown.

So we had to give him a very quick answer to this–Santa’s Christmas Magic. That Santa can open the chain from outside with his magic, so he can come in the front door.

And this is where Disney has screwed up even that aspect to our story–because in The Santa Clause, it shows Tim Allen turning a vent into a fireplace for Santa to appear in. The only visible vent we have in the house is in the center of the living room, on the floor. (Really odd place for a vent, but it is what it is).

So my son is very skeptical about how Santa gets in the house. Especially since we have an alarm system on the house.

“But Mommy, wouldn’t Santa set off the alarm?”

“It’s part of his Santa Magic, Brandon. The alarm doesn’t detect him.”

He pondered that for a bit. Then he said, “Well, I hope no bad guys get that magic, because they could go into anyone’s house.”

I had to promise him that Santa’s magic only works for Santa, and he had nothing to worry about. That seemed to pacify him, at least for the time being.

We shall see what this year brings.

Especially since his big sister (now 11) knows all the Santa secrets (Thanks Wal-Mart… your commercials ruined my daughter’s beliefs–another story for another time) and she might “help” with the myth of Santa.

And hopefully not confuse my ever-so-detail-oriented son’s beliefs. Because I want him to believe in Santa for as long as possible. I doubt he’ll make it to 10 still believing, like my daughter did, but we shall see. I will do all I can to let them keep their childhood.

They grow up too fast anyway. I want them to be kids as long as possible.

How old were you when you learned about the secret of Santa Claus?