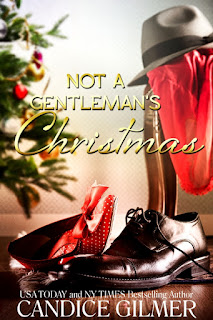 Here’s an excerpt from my story, Not a Gentleman’s Christmas, as part of A Very Alpha Christmas Box Set, still on sale for $0.99

A gentleman would save her from her curse. He’s no gentleman.

Trapped by a djinn’s curse, Ruthie has spent the last seventy-five years unaging, never changing, in a box of recipes. This Christmas is her last chance to break the curse, or remain among the dusty papers and fading ink forever.

She assumes, when Lee opens the box, he’s there to help her escape the djinn’s magic. That’s what a gentleman would do, after all. Ruthie learns quickly that Lee is no gentleman, and his wolf-side is positively beastly. 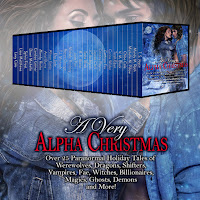 The sound of bags rustling came from the living room. Even though Lee was twenty-seven, during the holiday season, the sound of paper crinkling and being told not to go somewhere during the season made Lee grin.

The challenge was enough to put him in the Christmas mood.

He gazed into the living room.

Then an idea came to him. He turned to Ruthie. “So he can’t see you, right?”

“No, of course not,” Ruthie said as she wiped off the kitchen counter.

“So walk out there and tell me what’s in the packages.”

She paused and put her hand on her hip. “Lee, that is not nice.” Though she smiled as she spoke.

“I certainly will not spy on your Christmas presents for you.” Yet she glanced toward the living room as she spoke, with a grin on her face.

He took a step toward her. “Bet you would if you could.” He came right up behind her. “Bet you used to shake all the presents under the tree, trying to figure out what was in each one.”

She didn’t look at him. “That wouldn’t be proper.”

He leaned in, almost whispering in her ear. “Doesn’t mean you didn’t do it.”

Get your copy of this great Christmas Box set, filled with books by all sorts of amazing authors while it’s still around!