Before His Eyes Excerpt 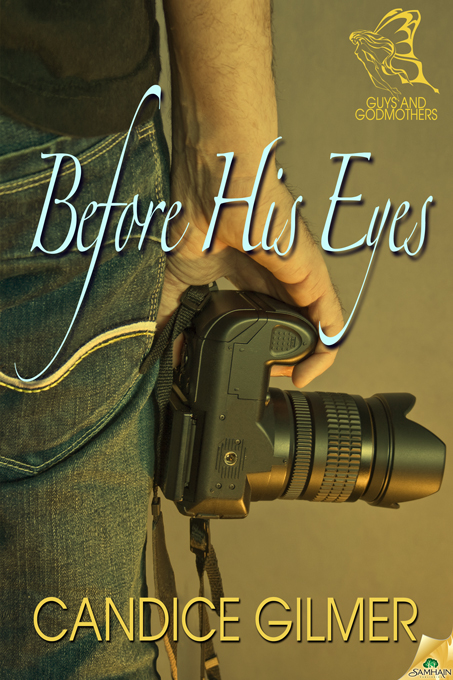 Sometimes even a fairy godmother needs to call for backup.

Guys and Godmothers, Book 2
When Fairy Godmother Lilly Bloom gets her latest assignment, the rules send her into a minor panic attack. She must bring two people together—using as little magic as possible.
Photographer Bruce Matthews has finally found someone who really, really gets him. He and Greta like the same things, laugh at the same jokes. There’s just one thing—he’s never actually seen her face to face. Her social media profile bears no picture.
Much as Greta Vandecall yearns to leave her small town and meet her online prince charming, secrets chain her to the past and force her to hide her face from the world. Secrets she knows would destroy the friendship she values most.

A steampunk convention seems to be the perfect way to meet face to mask. And in the excitement of the moment they connect in a very warm, real way. But cold, hard reality isn’t far behind. And if Lilly fails, this time she’ll lose her fairy godmother status. For good.

Bruce’d had multiple reasons for giving Greta the cell phone number. Partly because it would be easier for her to text him if she didn’t have to go through Facebook, since she didn’t have a smart phone. The other part, though, was more personal.
He’d hoped she would share a photo with him.
So far nothing.
He didn’t know how he should feel. Both pumped about talking to Jason, and a little sick.
He’d friggin’ asked Jason to get him a photo of Greta.
It had come to him in a blink of clarity—albeit drunken clarity—at the bachelor party. He’d been chatting with her for six months now, and not once had he seen her photo.
Well, that wasn’t entirely true.
She put up a photo of her toes when she’d gotten a pedicure and had little gears on each nail—very awesome and steampunk. And Bruce loved all things steampunk.
Even toes.
He wanted to know more about those toes.
Snap—his best friend was a private investigator. Jason could find out anything.
Two unconnected ideas came together.
Pics of Greta.
Staring at his phone, he wondered if he should call Jason and tell him to forget it. Everyone had their reasons for privacy.
But Bruce was a photographer. He saw things differently. Pictures were his world, and not knowing what Greta looked like made him nuts.
He didn’t care if she was fat or thin or short or tall. He worked with all sorts of people, and saw the beauty in even the most asinine things.
Especially steampunk toes.
He was beginning to think he was a little obsessed with this woman. Maybe the pictures would be a good thing. Then he’d know what she was hiding—and he was sure she was hiding something—and maybe he’d be over this obsession.
Might even want to go on a real date again.
Because spending the night drinking beer and texting Greta did not make a real date.
Might have been more fun if you were there… – Bruce
He walked into his condo, flipped on the lights, turned off the security alarm. His ten-year-old Labrador, Steve, with as much energy as someone who ate the entire turkey on Thanksgiving, turned his head toward Bruce, yawned, stretched, and curled back up in his dog bed in the corner.
“Such a meanie, aren’t you?” Bruce said. The dog made a grumble and went back to sleep.
The old boy didn’t have much energy left. Regardless of the daily walks and regular vet visits, Steve’s days were numbered. Already he’d gotten gray around his nose and mouth. Those big fatty tumors all over him and the arthritis made getting around harder for the dog.
Bruce took a seat on the couch, setting his phone on the coffee table. Or would have, if he hadn’t seen the reply from Greta.
Hardy har har… – Greta
He slipped off his shoes, smirking.
Knew that was coming.
Steve groaned, hobbling over to the couch, and climbed up. The dog grunted and laid his head in Bruce’s lap. He stroked the dog’s head, and in a flash the dog snoozed again.
So he answered Greta’s text.
You woulda had your pick of hot guys… – Bruce
Even if I was the last woman on earth, I would never invade a bachelor party… – Greta
If you were the last woman on earth, then who’d be getting married? – Bruce
He picked up his tablet, grinning as his email loaded, because he couldn’t wait to see what she’d say. Not that he wanted to see if he had any new work orders come in. He was much more—
Ping.
Maybe you all are gay, and what would I want with you? – Greta
He laughed, waking up Steve. “Sorry pal.”
The dog snorted and lay back down.
Must reply…
Thought women loved to “turn” gay men. – Bruce
After hitting send, he wondered if she’d laugh. And then wondered what her laugh sounded like. Again it hit him that he’d never seen her smile. Didn’t know what color her eyes were.
He shook off the rather sentimental thoughts and turned to his emails. Work beckoned. Three new cover art request forms, two photography inquiries, and seventeen spam messages.
Bruce started with the cover art requests, scanning the forms Clandestine Publishing, an ebook publisher, had sent. God, he hated the name of the company. But even if he did, their checks never bounced.
The first two were pretty simple. He could knock those out pretty fast—the authors were veterans of the publisher. They sent links to photos, and were pretty simple in their requests.
The third had a little more—good God, she wanted a goat on the cover?
He rolled his eyes.
He started doing ebook cover art a few years ago because his sister Denise had asked him to do a cover for her first release with Clandestine Publishing. And hey, he was a good brother. Why wouldn’t he? The publisher liked his work, so he started doing more.
The book covers supplemented his photography work, and whenever he could, he used his own stock, which helped both businesses. Now he did between four to seven covers a month—and on a couple of rare occasions, as many as fifteen.
Jason and Roark didn’t know about the cover work, though Bruce kept a small gallery of it on his photography website, since he used his own photos. Which showed how much his friends actually looked at his website.
He knew his friends would razz him forever. So he didn’t bring it up.
His phone beeped.
Some women like a challenge. – Greta
Now that couldn’t go unanswered.
Available from Amazon, Barnes and Noble, and Samhain Publishing.