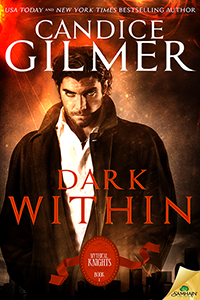 I’m super excited about the release of Dark Within.

If you know my books, and have been with me for a while, you are probably reading this, thinking, hmmm, this sounds familiar.

Well, you’re right. It should. It was once called Unholy Night. However, please note, if you read Unholy Night way back in the day, then you still haven’t read this story.

Dark Within not only has been completely re-written, it’s almost 3 times longer than the original was, with much more development between Neil Drigan and Marissa.

Not to mention, the world has been reworked considerably, and is a much richer, more in depth mythical world. Also, I have more stories in the world — Brightest Shadow

being the prequel, (the dreaded #0.5 book that my daughter teases me about. “It’s a .5 Mom, that’s just weird. A .5!” ) and telling David Drigan’s story of becoming the Drigan Alpha.

So please, check out Dark Within, and enjoy stepping into my world of werewolves, vampires, and the immortal Knights Templar who are supposed to keep them under control.

There was a time Marissa van Dyke loved Halloween. Then tragedy struck. Now the sight of a jack-o-lantern only reminds her of what she’s lost. In fact, she’d prefer to just hibernate.

But recently her nightmares are becoming too intense to ignore. Dreams filled with horror-movie creatures that come closer to killing her every time. Where these vampires and werewolves are coming from, she doesn’t know. She only knows they’re relentless.

Neil Drigan has no interest in finding a mate. Bind himself to one woman? No thank you. Permanent is for the wolf pack Alpha–his brother. Yet lately he persistently dreams about running, in full wolf form, to save a beautiful woman who smells of flowers–and death.

At first the woman’s identity is a mystery, until he realizes the dreams are a residual imprint of something that really happened. Not only is the woman temptation wrapped in real flesh and blood, she’s still in danger. And the one thing he never thought he wanted.

Warning: Werewolves, vampires, Templar Knights with attitudes, and a girl who must face her biggest fear in order to find love.