Found this picture in a People magazine at work, and I thought it was wonderful. And then I turned the page.

Disney has done a really great marketing design, using photographer Annie Leibovitz to do a series, (and evidently this series has been going on for a few years now) of live action shots of Disney movies, with Hollywood actors.

This one, is of course, Johnny Depp as Captain Jack Sparrow, and Patti Smith as a pirate. 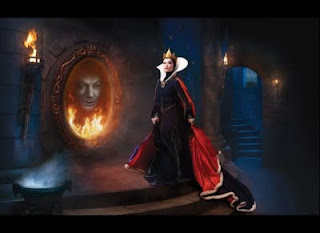 This one here, is a dramatic shot from this year’s campaign, with the Evil Queen from Snow White, and of course, her magic mirror.

Cast is Olivia Wilde (Tron, House — She was “13”) as the Evil Queen, and for magic Mirror?

Personally, I like this one, but I find I get a kick out of Baldwin, because he doesn’t seem to take himself too seriously. And it’s really a great photo, too.

For more of the photographs, and more information about the series, here’s a link to the Huffington Post where an article, and more slides of this year, as well as previous year’s campaigns are.