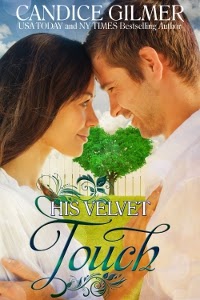 Today His Velvet Touch is being released on Amazon, Barnes and Noble, Kobo, and iTunes

I am super excited about this — I really do love this story, Harper and Chris are great. I was thrilled when they were so well received in the Taming the Alpha box set, and going back to their relationship was a complete joy. The original story didn’t allow me to have all the details I wanted in the story, because of the constraints of the box set, so I’ve been tinkering with it to weave those things back into it before I released it.

It’s also the beginning of a new series of contemporary romances I’ll be doing. While they won’t necessarily be connected (though there are a couple of trilogies in this world), the characters can/will pop up from book to book.

It’s just this nice city–too big to be a small town, too small to be considered a big city–Barrum Ks is going to have a lot of fun people that I hope you’re going to enjoy as much as I am writing these books.

And there’s a few other stories I have simmering on the back burner, waiting for time to write them. (Because that’s what it’s all about, really. The time involved…)

So I hope you take the time to visit Barrum and meet Chris and Harper (excerpt here) They’re a lot of fun. An independent woman and an alpha male, who mix, well, most of the time.