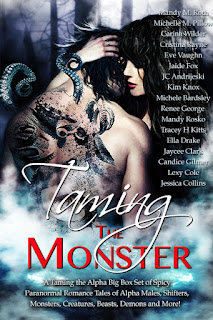 That’s right, today is the day that the TAMING THE MONSTER anthology releases!

This is such an amazing collection of stories, by an incredible cast of bestselling paranormal romance authors!

Mandy M. Roth – Prince of Flight (King of Prey World)–This bad boy biker beast has met a beauty that isn’t scared off by what she sees.

Michelle M. Pillow – Stranded with the Cajun (Captured by a Dragon-Shifter)–The bayou is about to get a whole lot hotter.

Carina Wilder – Hunted— Every woman dreams of meeting a desirable man on holiday…but he’s not usually a mythological creature.

Cristina Rayne – Seeking the Oni (Incarnations of Myth) — Reality is more wondrous and scary than she could have ever dreamed.

Eve Vaughn – Thief–  A down on her luck thief steals more than she bargained for…his heart.

JC Andrijeski – The Rings Fighter (Alien Apocalypse) — Although he is the hottest alien overlord she’s ever seen, he may not be exactly what he appears.

Kim Knox – Something Wicked — In trying to escape her marriage to a half-demon, her usual bad luck traps her with him.

Michele Bardsley – A Damned Deed (Deed Brothers) — Drawn into battle against a killer cult, she soon realizes that more than her life is at stake…so is her heart.

Renee George – A Door to Midnight (Midnight Shift) — When destiny knocks at your door after midnight, you let him in.

Tracey H. Kitts – Sacrifice — Being sacrificed to a lake monster was not how Ivy wanted to spend her birthday.

Ella Drake – Kilt in Space (Space Grit) — Scaring the ship engineer wasn’t exactly how this shy monster wanted to get her attention.

Jaycee Clark – The Sandman — When the Sandman finds her, Chevy turns to the dangerous dragon shifter lover she left behind. 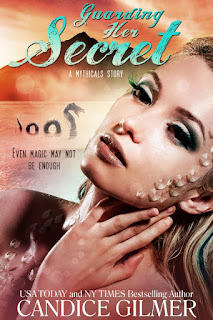 Candice Gilmer – Guarding Her Secret (The Mythicals) — When the monster is your ex-girlfriend, sometimes the rules have to be broken.

Lexy Cole – Billionaire Shifters in Manhattan (The Wolves of Central Park) —  It’s strictly forbidden for vampires and werewolves to be together.  Rules are made to be broken.

Jessica Collins – The Singularity — I was best friends with a monster…and never even knew it.

Of course, there’s my story, Guarding Her Secret. It’s from the same world as Saving Her Destiny

Reese Appleton, a Fairy In Distress Unit member, who assisted Duncan Molar in the whole “Cara Wallace–Banshee Incident,” now has his own case to take care of.

The Loch Ness Monster is getting a little too noticeable, and she’s attracting the wrong kind of attention. So it’s up to Reese to try and keep this beast under control.

Problem is, Reese couldn’t control Viona when they were dating.  How can he expect to now?

Check out the Taming the Monster collection — for only $0.99, it’s certainly worth picking up!