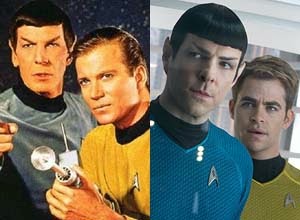 There’s a lot of talk out there about Hollywood not having any new ideas about movies, and as such, they’re rebooting all these old, successful movies and franchises. (My husband is one of these purists, always being rather against the idea of a reboot in most cases. However, he has been pleasantly surprised by a couple–see asterisks.)

1. Star Trek*
2. Superman* (Has not seen Man of Steel, but Superman Returns he does approve of, however, it took watching it several times before he passed judgement.)
3. Batman* (To a point… Christian Bale’s wheezing as he talks when in Batman mode gives us both hives)
4. Robocop
5. Judge Dredd
6. Total Recall
7. Red Dawn
8. Footloose
9. Dune (referring to Syfy’s miniseries they put out in 2000. I liked it much better than the original movie from the 80’s.)
10. Karate Kid

And here’s a more complete list of rebooted movies, some released, some coming up later: Next Movie–50 Upcoming Movie Remakes

And sometimes, these reboots will do the original story justice.

Sometimes, not so much.

It just depends, really, on what’s changed, what remains the same, and purity of the original story melded into the new version.

I bring this up because I wonder about the same thing for readers when it comes to books.

I am in the process of completely revamping a series to re-release sometime next year. (At least, that’s the game plan. We shall see.) As a result of the massive re-tooling of the first novel in the series, I’ve made sweeping changes, including changing the original titles. The characters will remain the same, but the events are different. There’s more to the story than what was there originally.

I always felt when I wrote them originally that there was a lot more to the story–the world, even–than what I’d managed to get out. But at the time, they were some of my first books, and I hadn’t really learned how to get all that good stuff out.

Or even how to figure out what was important in a story, really. I mean, I wrote them seven years ago. I’ve learned a lot since then.

But I also find myself sitting here wondering, would readers be okay with a revisit to an older series like that? Even if it has been reworked and rebooted?