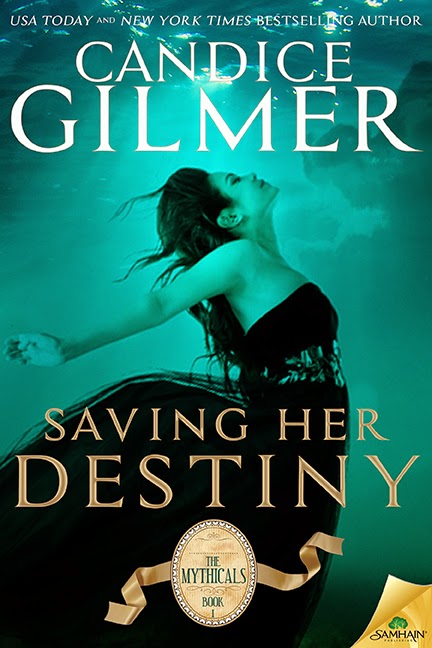 This one is so pretty! I think it’s one of my all time book cover favorites.
This is one I pretty much told the cover artist to “have fun.”
She went in a very different direction from my other books, but oh my goodness,
she did an amazing job.
Saving Her Destiny is coming in ebook and Print in June of 2015
Pre order is available on Amazon and Barnes and Noble
Sometimes the future comes knocking. Sometimes it knocks you into next week.
The Mythicals, Book 1
Fairy-In-Distress team member Duncan Molar’s mission is as simple as it is desperate. Find his missing best friend, banshee Cara Wallace, before an assassin lights the magical fuse that will unlock her scream, wiping out the last merrow colony on earth.
Since the day he rescued her from a fishing net, the near-victim of her very first scream, they’ve been joined at the hip, he helping her with her telepathy, she helping him remember the beautiful side of being a fairy.
When he finds her, the crisis isn’t over, for the unreleased scream could kill her…unless he gets her to a remote location and figures out a way to release it safely. The solution blows them so far apart, Duncan’s back to square one. Doing whatever he has to—including sacrificing his job with the FID—in order to save her.
Because secretly, he’s been in love with her for a decade.
Warning: A determined fairy, a banshee-in-distress, and a djinn that will only make matters worse.