So What’s The Hardest Part?

May 10, 2013 | Avengers, Babblings, Creative Process, Do The Math, Inspiration, Joy in the Writing World, Plotting, Procrastination, Why I Write | 2 comments 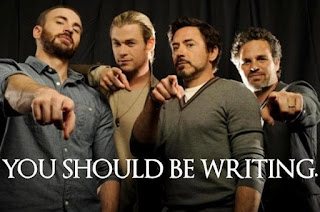 The hardest part of writing is, well, the writing.

Okay, it’s the hardest, but it’s also the most fun part.

But it’s the hardest.

Anyone who’s ever put pen to paper or fingers to keyboard knows this. It’s not nearly as easy as you might think, just wanting to write a story.

But, but, I have this awesome idea!

I hate to break it to you, but you’re not the only one. There are a lot of amazing, brilliant ideas. These wonder, stunning, fabulous concepts that just beg to be written.

They’re a dime a dozen, to be honest.

It’s a lot more of a challenge to do the work of writing the story. Not because you can’t see the ending  or don’t know where the story’s going to go, it’s because getting it there is the problem.

Short stories are fairly easy with that stuff–you don’t have a lot of space to get to the end.

The longer the story is, the more you have to “fill out the middle” and put all that stuff there, that makes reaching that ending more satisfying for the reader.

But it’s still a matter of pushing through and writing. Some people need routine to write. Whether it’s writing at the same time of day every day, having certain music playing, or being in a specific location, that routine gets you into your grove and gets you focused. (Though while I’ve written in bars and coffee shops, I prefer to write at home, because it’s much easier to get up and argue with myself in private than in a coffee shop.) Some people journal for 10-20 minutes before they start writing to get into that head space.

Some people plot the story out from beginning to end. Others fly by the seat of their pants. Others still do a combination of the two, loose outlines mixed with pantsing each scene. Then there are others who write out of order, “puzzlers” and put everything together in the end.

Is there a wrong way to do it? Nope. Just finding the one that works for you.

The only wrong way is to not do it.

The hardest part of doing it? Making yourself. Because there’s no wrong way to write, except not writing.