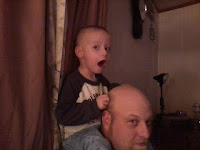 For those of you who know, I go to Sunday dinner every Sunday with my parents. They host dinner, usually making a great dinner for us to enjoy, I’ve done it since, well, since I moved out on my own.

It started because I was single, and got no good healthy meals living by myself, because, really, who wants to cook a well-balanced meal for just one person? It’s hard, there’s always leftovers, and I wind up eating on the leftovers forever, and would wind up throwing the leftovers away after a few days.

When I was single, it became the litmus test for boys I dated. If they either didn’t want to go, or didn’t get along well with my family, then I knew they probably wouldn’t work out. If the guy was serious, he’d want to meet my family, etc. There were very few who did.

My husband was one of the few that passed. Barely. 🙂 He was so shy and intimidated by my parents, he barely spoke to them, at least then, which is strange, because my husband has a wickedly funny sense of humor, and many times will have me in tears from his wit. So to see him so shy around my parents was strange.

Until one time, my mother was telling a rather entertaining tale from her girl’s trip to Las Vegas, and my husband popped off one of his stellar witty comments. I let out a bark of laughter. My mom just stared at him. So did everyone else in the room, because Bob rarely spoke.

And my mother got this strange grin on her face, and said “Good one, Bob.”

After that, it was on. He loosened up, and my parents began to see what a cut-up my husband really was. Which I’m so glad, because my parents weren’t quite sure of the union between us, but I must say, I think that Sunday Dinner has absolutely helped with that.

Hubby gets to know my family, my family gets to see that he’s a really good guy. And Bob, being taller than anyone else in the family by about 5 inches, is always handy for changing light bulbs and getting my mom those hard to reach items on the shelves.

Not to mention, occasionally, he’ll let one of his zingers out, and get my mom, which is always fun.