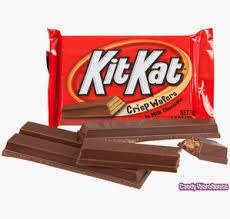 Yes, Threat Level Kit Kat is actually a thing in my house.

I mention this, because I’m sure  I will mention “Threat Level Kit Kat” in future posts. It is becoming a regular turn of phrase in my house.  I thought it would be important to explain what that was.

It sounds simple enough–that someone is desperately craving a Kit Kat.

Nope. not here. There’s a bit more to the story than that.

This started when we had gone to another couple’s house for the evening. I believe we’d barbecued and their kids were playing with our kids and everyone was having a wonderful time. We parents were discussing the latest developments in pop culture–what happened on the Walking Dead, or Once Upon a Time, and the latest developments in movies we’re interested in seeing.

For dessert, the hostess had bought a Kit Kat for every kid in the house, and proceeded about an hour and a half after dinner to disperse the precious candy.

Not long after, as we discussed different things on the rear deck, the husband, Mr. Matt, went inside to freshen his drink, and while he did, started picking up the kitchen a little.

There, on the buffet table sat a partially eaten, slightly melted Kit Kat.

As any of you parents might guess, this is the beginning of Threat Level Kit Kat.

From my perspective, the following is what happens:

Mr. Matt, coming out onto the deck, face ashen, hands waving, and panic taking over his usually laid back expression,

And just past Mr. Matt, I see my 5 year old, Brandon, literally rolling on the floor, throwing his arms around, and bawling. Not one of those little, oh Mommy I got an owie, cries. This was balls-to-the-wall wailing. Painful wailing.

I leaped from my chair and ran into the house, immediately assuming that he’s hurt. Brandon is red-faced, tears streaming down his cheeks, even his normally perfectly flat crew cut is sticking out in weird ways.

“Brandon, Brandon, talk to me,” I said, pulling him off the floor.

He immediately buries his face in my shoulder, and I go into Mom-mode, stroking his back, trying to calm my youngest down.

Now, I must qualify this–if you don’t know my son, he is the most level, even tempered kid in the world. He doesn’t act like this. Ever. He runs into walls, shakes his head, and is off again. He doesn’t get mad like this. As a matter of fact, I’ve never seen him get this mad before.

His fits, if you want to call them that, usually involve him going into his bedroom, and saying “I want to be alone,” then proceeding to mutter to himself about the injustices of being a kid. (I swear I should get them on tape some time, they’re hysterical.)

So for my boy to be this upset, rolling around on the floor, well, this is not normal. This is serious melt-down territory. (New to us, for certain.)

I turn and look at this man who’s the same age as I am, and he’s blubbering like a kid in trouble. My first thought is that this guy has three kids, why is he freaking out?

“What happened?” I asked.

“I found this Kit Kat. It was all melty and laying on the table. So I thought no one wanted it, and I threw it in the trash.”

“Oh,” I said, immediately realizing the repurcussions of what he’d said.

Like LOVES them. They are his FAVORITE CANDY EVER. The semi-near second is Twizzlers, but Kit Kat always wins.

“I’m sorry. I’m so sorry… I didn’t realize..” Mr. Matt stammers around, and starts opening doors. Then he hollers for his wife, hoping she had an extra Kit Kat stuffed away somewhere.

“He THREW MY KITTY KAT AWAY!” Brandon yells.

The look on my five year old’s face was priceless–making him far too old looking than his little body.

“It’s okay, Brandon. We’ll get you a new one.” And I realize what must have happened. “Did you put it down to go potty?”

By now, Mr. Matt’s wife had come in, and she was ransacking her treat jar, looking for something to give him.

“Come on, Brandon, we’ll find you something else… Anything you want. Anything.”

Brandon finally creeps across the kitchen, and spies two packages of Twizzlers (the little Halloween sized ones) and a Ring Pop.

I might have made him pick between the two different candies, any other day, but glancing between my son and Mr. Matt, I figured I’d better give in this time. I think both males needed some resolution.

And God Forbid we throw away another Kit Kat.

*As a side note to this story, my son has forgiven Mr. Matt for throwing away his candy, and Mr. Matt is mostly over it.

Though my husband can’t help but tease him every once in a while, and tell him how the boy wakes up in the night occasionally crying out for his lost Kitty Kat. (Not true, but funny)