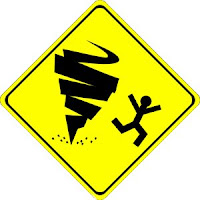 That time of year is upon us, and yes, I’ve already been utterly terrified by one tornado this season. I hope it’s the last one.

If you did not hear, almost 100 tornadoes popped up all over central Kansas on Saturday, April 14th, 2012, including a large, wedge shaped F3 (or some say F4) tornado, taking out a good portion of southeastern Wichita. This one appeared Saturday night–an unusual thing in itself, because tornadoes usually do not pop up after dark.

Fortunately, due to good meteorology and early warnings, there have been no fatalities reported, and very few injuries from this storm system here in Kansas. However, a mobile home park (Pineair), a residential area (Oaklawn), as well as quite a few commercial locations were hit.

I have seen this kind of damage before, having lived here all my life, but it is no less chilling whenever it happens.

A friend of ours is a storm chaser here in Kansas, and he’s made a video of some of the damage from that tornado. While it doesn’t show everything, if you ever wondered about the destructive power of a tornado, check this out. It’s very short–less than 5 minutes, but it will change the way you see tornadoes.