It’s Eleven Days until Release of Mission of Christmas, and time to regale you with another family story.

Be sure to leave a comment, so you can be entered to win a free copy of Mission of Christmas on November 12th!

So here we go.

This one centers around Thanksgiving.

Most of the family is at Grandma and Granddad’s house, getting ready for the great Thanksgiving day feast. And of course, all the men want to watch football. 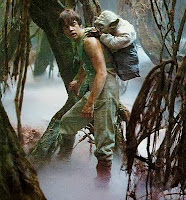 I was fifteen at the time, and the last thing I wanted to do was watch football all day long. I was at that obscure age where I was old enough to help out in the kitchen, but still filled with that angsty-whiny-teen attitude that didn’t want to do anything like, gah, help out.

Granddad had a television in the living room, and a small one in the bedroom that barely got any channels on it, since it just had antennas.

So I leaned over to my grandfather, looking for some kind of reprieve from the football, and begged him to change the channel.

“Please, pretty please, Granddad? Could we put it on 28? Please?” Because channel 28 was USA, and USA always ran a marathon of Star Wars during the day. This is before the prequel days, by the way. So it was A New Hope, Empire Strikes Back, and Return of the Jedi, all on back to back, with maximum commercial interruptions.

“Well, if you give me a kiss,” and he patted his cheek with his long skinny finger.

I grinned, and of course, gave into his demands. Because, he was going to put on Star Wars. I doubted it would last, but at least it would be a minor break from the football. And surprisingly, none of the other men in the room grumbled. (It must have been half-time.)

He flipped it over, and it was the infamous scene in Ep IV where Luke and Han are rescuing Princess Leia from the Death Star while I took a seat on the couch, closest to the television. (My father and uncle were already sitting on it.)

I remember this so vividly… It was the scene where they finally made it to the Millenium Falcon, and they were running on board. Storm troopers were everywhere, shooting at them. They were shooting back.

And my grandfather started laughing.

The sound tore my attention from this oh-so-serious moment of the story, glaring at my grandfather, who leaned over to  my father.

“They don’t shoot any better in space than they do in the darn westerns!” (My grandfather was a huge fan of westerns.)

My dad smirked. “Yeah, this is a western set in space.”

To my utter surprise, he watched the whole thing. Whether he liked it or not, I wasn’t sure, other than the fact that he didn’t turn it off. He might have said it was okay to me later, but I don’t remember for certain.

I just remember him and my dad comparing Star Wars to a western, and I was aghast at that. Until after a while, I figured out, Star Wars really was a western sat in space.

What about you? Do you watch any special holiday shows?