A Favorite Excerpt from Under His Nose 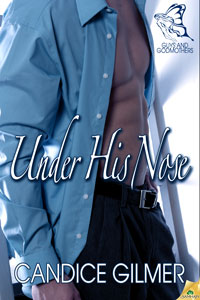 One of my favorite excerpts from my Guys and Godmothers, book 1 — Under His Nose:

Available from Amazon, Barnes and Noble, and All Romance Ebooks

Of course he was. And any time he recalled being around Stephanie. Whether he wanted to admit it or not, she had invaded his brain. More and more with every passing minute.

“I see.” She picked up another bloom and started caressing the petals. “So what do you think?” She didn’t look at him as she spoke.

He damn sure wasn’t going to tell her how much he wanted to throw her on the table and have his way with her. Instead, he said nothing, touched the dress strap that had slipped off her shoulder and slid it back into place.

Stephanie froze, their eyes meeting, and her lips parted, her tongue darting out to wet them. They were incredibly close together. Like kissable close.

She rolled the shoulder he’d touched and shook her head, breaking the spell. “You’re such a guy.”

She crossed the room to the other side of the work table,her fists clenched. She paced back and forth for a few minutes, not saying anything to him. Her lips moved, and he’d seen her do this before, when she was trying to decide what she needed to do.


When she stopped pacing, she put her hands on the table, like a boardroom warrior ready for attack. “Okay, fine. I’ll go out with you. But I gotta warn you, I’m a horrible girlfriend.”