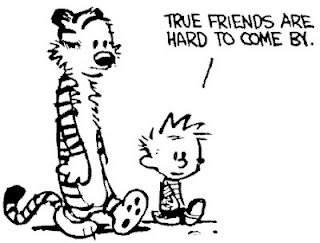 Woke up this morning thinking about friendship. Probably had to do with that status-update chain thing I put on my Facebook page last night, asking people for a one word answer of where we met.

I got to thinking about who my friends are, and why they are my friends.

How did we meet, come together, and why did we stay together.

And while I have a great deal of friends who are writers — it’s practically a prerequisite to writing, gotta have someone to whine at when the writing’s SO HARD — I have quite a few who aren’t, that I’ve met just being out and about in the world.

And all of these friends I value a great deal, and don’t know how I’d be where I am without them.

The joke goes “A true friend will bail you out of jail in the middle of the night. No, wait, a true friend would be in the jail next to you, saying ‘That didn’t look like a cop to me…'” (Jeff Foxworthy, I believe said something to that affect on one of the Blue Collar Comedy Tours).  I have both kinds of friends. The ones who would bail me out of jail, and the ones who would have been sitting next to me in the jail cell.

I call that a win.

Never so much had it been more obvious to me, than this past weekend when I went out with my husband and another couple for dinner. We had a great time with the other couple, (even if the dinner didn’t set well with me–no one’s fault but my own, I ordered something I shouldn’t have), and I realized when we got home that we probably see that couple once a year.

Once a year.  Sad in itself, but also beautiful, because we can pick up right where we left off, and it’s like no time passed at all. Now we did make promises that we would try to get together more often with them (hopefully it’ll work this time), at least every six weeks or so, even if we merely barbecue or something.

And I am thankful for them.

I love all the people I truly call “friend”, because I am blessed with a great deal of people that while I do not get to see them very often, I do still consider them friends, and always will. Life may not allow me to see all my friends every weekend like it did when I was 25, but I’m on the fast track to 40 now, and really, I don’t have neither the time nor the desire to go out and party all night anymore. But spending time, even if it’s just sitting on the deck, visiting, having a beer, that’s a great night.

Definitely a win for me.