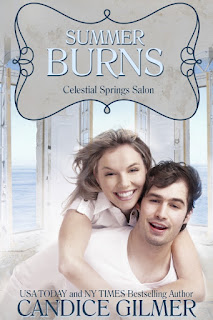 Release days are always full of terror and excitement for me.
It’s a double-edged sword, really.
I want a lot of sales, (who doesn’t) and good reviews (of course) and a great opening Amazon ranking, (which they say means you’ll get shown to more people, and in turn, get more sales, etc. Of course, I don’t know that everything they say is accurate, but it seems to be somewhat on track).
However, this is my first official, “all by myself” release. It’s not my first dip into self-publishing, I did that with His Velvet Touch. But that one was sort of a “test run,” if you will–it had already been released in the Taming the Alpha box set, had all the “stuff” done to it for sales (editing and all that), it just got packaged and released.
Summer Burns, however, is different for me. I came up with the story all by myself, I wrote it, had it edited, beta read, sent it to reviewers, formatted, all the thing you do to produce a book by yourself.
Though really you can’t call self-publishing “by yourself” simply because there’s so much that you hire out for, like editing and cover art. Nonetheless, it still feels like you’re by yourself, because really, most of my work is done via email. Meeting many of these people in real life is a rare treat.
It is far more different than working with a publisher. Like I will have access to pretty much the current sales figures. I’ll watch the numbers go up and down, and I’ll laugh and cry and scream and moan and swear off never publishing ever again, and then I’ll be writing like a crazy person, unable to find any other way to get the high of doing it all over again.
It will be a rocky next few days, and I have warned my family, because I’m usually a mess on release days.
And most likely, I’ll be in my corner, meditating on the fact that I really can write books, and nope, they don’t suck. Most of the time, anyway.
Get your copy of Summer Burns for Nook, Kindle, Ipad and Kobo reading devices.