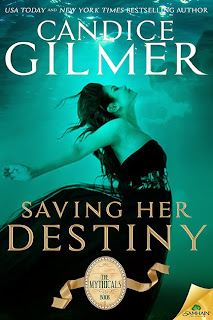 Saving Her Destiny is releasing next week.

So far I haven’t bit off my fingernails, waiting in anticipation, but I’m getting there. (I always lose my mind a bit as reviews start coming in, and promo starts happening. So far, though, I’m not going too crazy)

It’ll be coming out in digital and print here:

Barnes and Noble Nook or Print

So far, Saving Her Destiny is getting good reviews on Goodreads too, which always makes me smile. (I know, I shouldn’t go anywhere near Goodreads as an author, but I like to see how many people put my books on their “to be read” or “currently reading” shelves.)

Already I’m seeing some feedback wanting to know more about The Mythicals Series.

The Guys and Godmothers trilogy, (Under His Nose, Before His Eyes, and Just His Taste) lead into The Mythicals, by introducing Fairy Godmothers and The Fairy Realm.

Then comes Saving Her Destiny, The Mythicals #1, set on the magical island of Avalon.

There are two more stories in this world! One is available right now, FOR FREE.

That’s right, on the Dark Faerie Tales Blog, I have a short story, called Deals With Sea Witches Never Go Well, involving Cara, the heroine from Saving Her Destiny, in a “Little Mermaid” type scenario. Check it out. And while you’re there, enter to win a copy of Saving Her Destiny!

As for the second story? It’s coming in October, as part of the Taming The Monster Anthology. More to come on that later!

And then, because I can’t just leave well enough alone, there’s more–though not set on Avalon. Instead set in the city of Liverly, KS, a midwestern town where nothing is even close to what it seems, with hell gates, Immortal Knights Templar, werewolves, vampires, and monsters that go thump in the night and steal your soul.

That series is starting in September, called The Mythical Knights.

Yep, it’s a lot, and it all ties together, because I’m a freak like that.

So lots of releases this year. Lots and lots of paranormal things coming out. (And I haven’t even included all the contemporary romance stuff I have going on as well…)